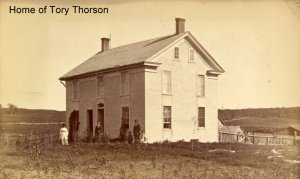 This was one of the first homesites in Glenwood, and the only building in the Trenham photo collection that is still standing in 2015. built on the corner of Minnesota Avenue and 3rd Street SE / Lot 4&5 of Block 1, Thorson’s first addition.

It was moved to lot 8 and half of lot 7, block 2, in the Ofthun Addition to the city of Glenwood. (The second house east of the intersection of 1st Avenue and 3rd Street SE. It is on the North side of the street.) It was moved to make space for the Bickle House.

According to G.C. Torguson in the Historical Survey, many of Pope County and Glenwood’s early meetings were held in this building. 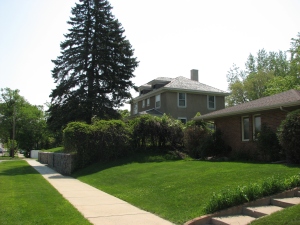 Original location of the Thorson House.

According to J.G. Whittemore, the people in the picture are Guida Thorson, Mr. & Mrs. Tory Thorson and children Alice and Edwin.

Tory Thorson (According to the Illustrated Album of Biographies, 1888), was a lumber dealer in Glenwood and one of the most prominent and influential citizens in Pope County. A native of Norway, born in 1846, he moved to Pope County in 1866 after serving the in Civil War. “From 1867 – 1869 was deputy treasurer of the county. He held the office of postmaster under General Grant’s administration and was elected justice in 1867. He held the office of clerk of county court from 1871 until 1884, also various local offices in Glenwood. In 1866 he engaged in the lumber business in Glenwood.”
“In 1882 he engaged, with others, in the banking business and [was] vice president of the Bank of Glenwood. Mr. Thorson was one of the organizers of the Little Falls Railroad, and was one of the directors for some time. It was he who secured the right of way for the Minneapolis and Pacific Railroad, and [served] as right of way agent for that company.”

His daughter Alice was an artist and the author of “The Tribe of Pezhekee” which is the source of our “Princess Minnewaska” myth.

The following article was written by Steve Nestor for the Pope County Tribune.
It has been edited for length.

The original house on the Bickle House site was constructed for Tory Thorson and his family. It was moved in 1913, but is the oldest structure in Glenwood. The article below is an excerpt of an article written by Steve Nestor about the re-discovery of the house.

Tory Thorson immigrated to Dane County Wisconsin at the age of nine with his Norwegian parents in 1855. When the Civil War broke out in 1861 he enlisted in Co. B, Second Wisconsin Cavalry.  He served with distinction and was honorably discharged in 1865 and soon thereafter came to Pope County.  During the course of his life, Mr. Thorson served as deputy county treasurer, postmaster, clerk of court, justice of the peace and judge of probate. He was vice-president of one the first banks, and helped form the Little Falls Railroad serving as an officer and right of way agent. A man of honor and much public admiration, Thorson passed away in 1899 at the early age of 52.

The Thorson House was sold to Hans and May Larson in 1902, then to Alice Cox in 1904.  In 1913, she sold the house to newlyweds, Francis J. and Flora Drake Bickle.   Mr. Bickle, a railroad engineer, intended to build the finest home in Glenwood for his new bride.  So in 1913, he sold the Thorson house to G.M. Hitchcock, a local contractor and house mover. Hitchcock moved the house to its present location. Mr. Bickle proceeded with his construction plans.  The 1914 Glenwood Herald Christmas issue presented an account of the new additions to Glenwood’s skyline noting several new homes completed in 1914, such as the Callahan, Greaves and Loomis homes.  They ranged in price from $3500.00 – $4000.00. However, Mr. Bickle’s home, built for his new bride Flora, cost $8000.00! It still stands today, thanks to the efforts of the Ann Bickle Heritage House members. Ann Bickle was Francis’s second wife. (And therein lies another story for another day.)

Mr. Hitchcock and his wife occupied the Thorson House on Green Street (First Avenue SE,) just around the corner from the Bickle House for a few years.  Subsequent owners include Jim Blair, The Limperich’s and Harold Kvale.  The current owner is Dan Guggisberg, local manager of Echo Water Conditioning Co.

Some years ago it was made into a duplex.  The roof overhangs are different today and one chimney has been removed, but the Thorson House retains its 1870’s appearance.  Nestor’s next research task was a look inside the house for significant architectural details proving the authenticity of the historical data.  The original rough sawn lumber is visible from the basement, and floor joists made from ripped and split logs are still in place. New dimension lumber was later used to install a suspended ceiling.  Open areas allow the 1870’s timbers to be viewed alongside steel trusses used to move the structure.  One of the present tenants reported evidence of a second chimney now removed. The repaired chimney areas and gable ends revealed square nails. These type ‘B’ nails were generally used between 1820 and 1890.  The earlier type ‘A’ nails heads were attached by hand and when compared, show varied shapes and differences. This find clearly dates the house and the era of construction.

What the future will bring to the Thorson House is entirely in the hands of the present owner and the community. Mr. Guggisberg is excited about owning this truly historic home and indicates his interest in preserving it.  Perhaps when repairs are required he will consider reconstructing the gables to reflect the home’s architectural history.  A 130-some year old house deserves such consideration.

Jim Gloege was quoted in the 1982 Whittemore House article, “…. the house is much more than a house. It’s Glenwood’s story.” Those words echo today, 129 years after our nation’s centennial when the original photos were taken.  The Thorson House offers us another chance to preserve and celebrate our history.