Like most local historical societies, we have MANY immigrant trunks in our collection. MANY. No doubt each one was a treasured item to someone who packed up their belongings and traveled to the opposite side of the world in search of a better life, but for it to really be valuable to us, we want to know the story.

Two of the trunks with no museum documentation had names painted and carved on the front. We did some research to see if there was any way we could connect them to Pope County history or if they really belonged in a different historical society.

Clearly, Mr. Ole Petersen wanted his trunk to be delivered to Madelia Minnesota in Watonwan County, should he and his luggage get separated. Judging from the spelling of North America, we could tell that he traveled from Scandinavia, most likely Norway.

I searched through our extensive files for every Ole Petersen or Peterson. We have several early settlers by that name. In each case, we were able to track their progress through North America on their way to Pope County. None of them came through Madelia. I also looked for anyone with the last name Leirmigen, with no success.
Eventually, I e-mailed the fine folks at the Watonwan County Historical society to see if they would like the trunk for their collection.

While waiting to hear from them, I turned my attention to another mystery trunk in our museum. This one had the name and destination carved into the front. “Margit Pederson (illegible) til Faribault Po. Rice Co. Minesota Nort Amerika.” There were no Margit Pedersons or Petersons in any of our records that could match the trunk. I began to think that this trunk really should go to the Rice County Historical Society.

There were two words under her name that I couldn’t make out. I tried making a pencil rubbing, and could still only make out the letters of one of the words: “glitre”. I can read some Danish/Norwegian, but that word did not make any sense to me. I asked Merlin, who can also read Norwegian, if it made sense to him. He pondered a moment and said, “There is a family with the last name Glittre in the Lake Johanna area of Pope County.”

So – back to the family files we went and discovered a file for John Glittre. The family took their name from the farm in Norway that was named for the glittering rocks on the hillside.
In John Glittre’s file was an obituary for his sister Margit Lerhaug, who had been the wife of Ole Peterson Lerhaug! I had misread Leiraugen as Leirmigen. Leiraugen was later shortened to Lerhaug.

Suddenly, everything fell into place! Needless to say, the trunks will not be relocating to Watonwan and Rice Counties, as they definitely have Pope County stories.

So now, between information gleaned from our family files and Ancestry.com, I can tell you the story of Margit and Ole and their trunks.

According to family lore, he (and his trunk) immigrated to the United States in 1883. He became a citizen while residing in Goodhue County.

She (and her trunk) traveled to the United States with her sister Anna aboard the ship “City of Berlin” and arrived in New York in June of 1885. She made her way to Minnesota and was married to Ole October 29, 1885 in Kenyon Minnesota.

The ship that brought Margit to America.

I was not able to determine with certainty if Margit and Ole knew each other in Norway, but since they came from the same town, it is quite likely.  The fact that they were married in October, only four months after Margit’s arrival in New York is another indication that perhaps they knew each other and planned to be married upon her arrival. 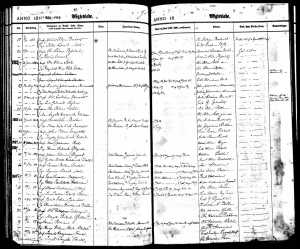 The marriage record of Margit and Ole.

They lived in Rice and Goodhue Counties for several years before settling in Pope County in 1889.

They farmed in Lake Johanna area and were founding members of the Lake Johanna Lutheran Church. They had 10 children together.