Just before the start of the Sunday’s Waterama Grand Day Parade, the Fire Department received a fire call. Confused parade spectators watched as firemen rushed from their line-up position at the top of the hill back to the firehouse to don their gear, small children were hustled off the firetrucks and off they flew, soon aided by firefighters from the surrounding communities. (Many of whom were also in the Grand Day Parade.)

An enormous storage shed full of hay was engulfed in flames. While there may be an investigation, the most likely cause was spontaneous combustion.

If hay is put into a barn or stack when it has more than about 22 percent moisture, not only does the hay lose forage quality, but it has an increased risk of spontaneous combustion. High moisture hay stacks can have chemical reactions that build heat.

The building was constructed in by McLeod Commodities to house potash, which was used to make fertilizer. In 1971, they had four buildings that could hold 75,000 tons of postash, with plans to expand. Glenwood was an ideal distribution point thanks to its location on the Soo Line railroad. This is the largest of the four buildings, built in 2 stages – half in 1970 and half in 1972. 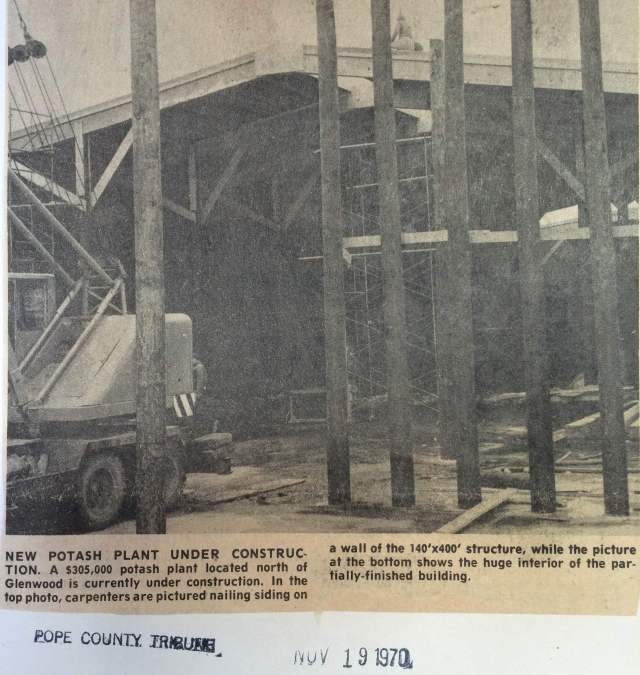 Aerial photos from this spring

Thank you to our brave and hard working volunteer firefighters and the local emergency responders for answering this – and so many other calls, big and small.