According to Mildred Karrigan Lachelt, immigrants from Donegal Ireland were the first Catholics to settle in the county. Families such as the Jeffers, Gaffaneys, Hogans and Hoffmans. Until 1903, the Irish Catholics attended services in Villard, and occasionally in private homes.

The first church building was across the street from what is now Central Square. The building is still standing, but has been converted into apartments.

First Sacred Heart building (now apartments) with the current church in the background.

Calvary Cemetery was purchased in 1930.

In 1935, the congregation constructed a basement church and held services there until the superstructure of the current church was completed in 1952. 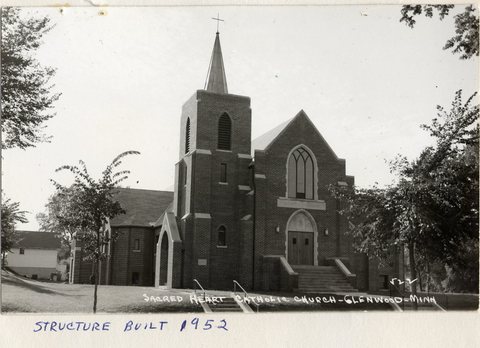