What do you do all day?

I often get asked, “So…What do you do all day at the museum?”

While it is true that there are many hours here without visitors, we are far from idle. I tell people that when we don’t have visitors, we are busy cataloging artifacts, archiving newspapers, researching photographs, designing exhibits and planning events.

The actual reality of a day can seem absurd if I tried to explain it. For example, I spent yesterday afternoon and most of today trying to put a box into storage.

Let me explain – A week ago today I had a couple of researchers stop in looking for information on the local GAR post. I pulled out the files from the cabinets, a shadow box full of ribbons etc., but had a challenge locating two boxes of GAR records. The boxes used to sit on the bottom shelf of one of the bookcases in our meeting room. The shelf had moved, and the boxes were no longer residing on the bottom shelf.

After a thorough search, I located the boxes on a high shelf in our photo storage room. Crisis averted. But how to avoid the situation in the future….?

We have a database that we use to track all the objects in the museum. The database list not only WHAT the item is, but WHO is connected to the item (creator, user, donor), the relative time period of the item, associated events, connections to other artifacts, and WHERE in the museum it lives. Almost every object is listed and we are adding photographs on a regular basis. But – most of the archives are simply in boxes on shelves and we rely on our memory to locate each box as needed. 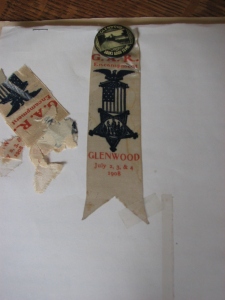 So – Yesterday I set out to get the Grand Army of the Republic records into the system.

The first step is to look through the records so I can tell the database what we actually have. The database is only as useful as the information I add. It turns out that most of the stuff in the box is from the Ladies of the GAR, and auxiliary organization. Membership in the GAR was limited to honorably discharged soldiers of the Union Army, so the auxiliary groups were often bigger. The Ladies here were particularly active.

I did find a list of the members of the Glenwood GAR, and took the time to add each of their names to the database so that anyone researching those men would instantly know that they were connected to the GAR. Then, while I had the list in my hand, I made certain that each of those men were represented on our master Veterans of Pope County list. Surprisingly, many of them were NOT on the list. That little side track took quite a bit of time, but now the Veterans list is more complete.

Another document in the records noted that the body of James A. Canfield (for whom the GAR post was named) was moved with much pomp and circumstance from one cementery (possibly the one where Central Square is today but there was another, earlier cemetery as well) to the “Glenwood Cemetery”  in 1884. This led to another bit of research as we have had some discussion about the date the town cemeteries were closed and whether the bodies were moved directly to the current cemetery or the cemetery near the Soo Depot, which also eventually closed. There is still some discrepancy about when the earlier cemeteries were used, but today’s research at least confirmed that the current Glenwood Cemetery was established in 1884 on land donated by Tory Thorson.

Finally, I printed the label and put the box away on the shelf. Now, anytime a researcher wants to know more about the GAR or the men involved, all we have to do is tap into the database, and we will know that all the information is in Box #9 on the second shelving unit in the central storage area. I can pull it off the shelf in a matter of minutes.

While the GAR box project in itself did not take that much time, it was squeezed in between finding projects for volunteers, assisting a researcher look up information on local railroads, finding a new location for the piano that we moved when we rearranged the shelves (this is different from the rearrangement a few years ago that resulted in the missing GAR boxes), updating the weekly “Trenham photo” blog post, scheduling school tours, taking pre-orders for the upcoming Glenwood history book, checking e-mails and answering the phone.

I put away a box. 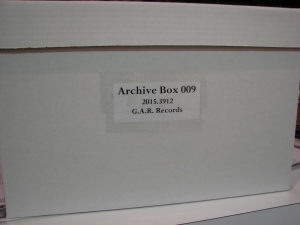