Pope County Museum A-Z is a continuing feature of our blog. Each week, I will highlight an item or items from our Museum collection.

This week’s item is a Doctor’s bag of medicine used by Dr. John F. Skinner of Terrace. 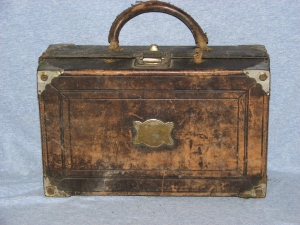 The case is small and rectangular and contains many small vials of pills and powders. One bottle still has the label for “Gas eliminant.” Also in the collection are Dr. Skinner’s surgical tools.

Dr. Skinner and his wife Hermina came to Terrace in 1881 with his brother Albert Skinner and his wife. George Wheeler of Terrace lent him the money to get started as a Doctor and druggist by lending him the money to by $56 dollars worth of drugs. Once that was paid off, Skinner called his business Skinner Brothers. Dr. Skinner ran his practice and his brother Albert ran the

drugstore. In 1884, Albert Skinner opened a drugstore in the village of Westport where there was a railroad. Dr. Skinner stayed in Terrace where he had been a leader in trying to get a railroad, but it never materialized and he lost money in the venture. He performed medical services for those who worked on the grading for the railroad trestle, and also spent money on the grading itself. The grading work ceased in 1887, but is still visible today. (It is interesting to think about what the sleepy little village of Terrace might have become had the railroad gone through.) 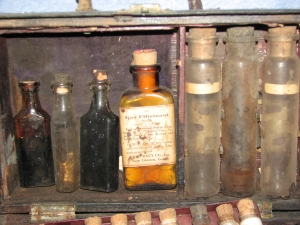 Dr. Skinner was a physician, surgeon and druggist with patients from surrounding counties. He traveled to visit his patients with his buggy or cart pulled by a team of horses, or by skis. He maintained his practice until 1919 when he died after contracting influenza.