Goingback Chiltoskey was an award-winning Cherokee woodcarver and educator. His work has been exhibited throughout the United States and internationally. Besides his beautiful art work, he also did work for United States government – including carving scale models of beaches that the military used to plan invasion campaigns during WWII. The Smithsonian has his work as part of their permanent collection – and so do we. 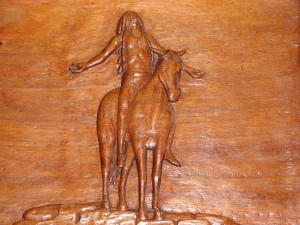 Cleora Helbing first encountered him when he was a student in the Federal Indian Schools, where he later worked as an instructor – encouraging other students to pursue their art. There are 2 pieces in our collection, a wall plaque and a pair of bookends. About the plaque, Cleora Helbing wrote: “Wooden Wall Plaque. An 11 1/2 by 15 1/4 inch cherry plaque, featuring the figure of an Indian seated on a horse with his arms uplifted, praying to the Great Spirit. This plaque, along with the bookends (66.1.35) were carved by Goingback Chiltoskey, and are representative of his first work. You might be interested to know how Goingback got his name. Goingback’s father and mother were in the “Trail of Tears” migration when the Cherokee were driven from North Carolina to Oklahoma because the white man wanted his lands. Most of the Cherokee remained in the territory–and later state–of Oklahoma. Some, like the Chiltoskeys, however, returned to North Carolina, and Goingback was named “Goingback Chiltoskey” in honor of their return.

Later Goingback became one of the famous Indian woodcarvers in the country and just this past year, 1965, he was honored by the U.S. government for his remarkable art ability in making a model of SM-1 nuclear power plant. I am glad I encouraged Goingback as a student to go on with his art work. I helped him to get his first job.”

In our (PCHS) research, we found another explanation for his name. He reportedly claimed that he was such a sickly child, the doctor had to keep ‘going back” to see him.