A is for Attu Basket

Helbing Collection A-Z is a new feature of our blog. Each week for 26 weeks, I will highlight an item or items from our Helbing Collection of Native American Arts and Crafts.
The first item is a tiny Attu Basket. It is only 1 inch in diameter by 1-3/8 inches in height. There are 20 rows and 18 stitches per inch. 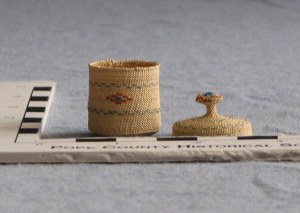 According to Cleora Helbing, “This tiny basket made of wheat colored grass with two thin blue lines running around the circumference of the basket and around the cover. There are touches of red on cover and basket. This basket and its mate which nests into it are the most valuable in my collection because, while the Attu Indians were perhaps the first basket weavers in the world, there are so few left and these are so scattered, that there will never be any more Attu baskets made. The Attu lived on Attus Island. In World War II they received word the Japanese were striking. A few escaped in canoes. The others were killed. The few who escaped went to various points in Alaska. I have tried to find out if any of the basket makers survived, but have been told there is no record.”

The Aleutian Islands are located 1,000 miles south of the Arctic Circle and stretch 1,000 miles of Alaska’s southwest coast toward Russia. Aleutians lived year-round in coastal villages governed by wealthy and powerful chiefs in a highly structured and class-conscious society.

The traditional material for these baskets was a type of rye grass that grew wild throughout the islands and was carefully gathered and prepared over the course of several months. In early summer, women traveled inland to find the longest and toughest grass available. The grass was cut and stored indoors away from sunlight that could bleach it and subsequently weaken the fibers. After it dried, it was sorted and split into thin strands. The prepared strands were bundled together and hung outside on cloudy days to again avoid the bleaching effect of sunlight until they were completely dry and ready for use.

Aleut baskets are constructed by twining thin, flexible horizontal strands together between vertical elements. In twining, two or more strands of horizontal pieces are twisted around each other in half turns as they pass over and under the vertical pieces. Theses threadlike strands of grass were so tightly woven that the texture of the finished baskets has often been compared to linen.

Aleut baskets are decorated with “false embroidery”, created by wrapping stems around the horizontal strands while weaving so the decorative pattern shows only on the outside of the basket.

As Cleora mentioned, World War II effectively put an end to the basket making tradition. Attu Island, the center for the craft, was invaded by the Japanese, all men were taken prisoner and forced to work in coal mines. The remainder of the population was evacuated and the island was never resettled. Their basket making tradition did not survive the disruption. Today, there are only 3-4 weaver. You can visit the website of Nina Kiyaykina here.

You can see images of traditional basket makers working on these tiny baskets at Alaska’s Digital Archives.

2 Responses to A is for Attu Basket