Posted on January 13, 2010 by popecountymuseum 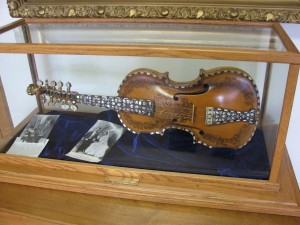 Violin made by Christian K. Thoen in 1892 in Norfolk, MN.  It has mother of pearl inlay and rosemaling done in ink on the trim.

Christian was born July 11, 1844 in Halingdahl, Norway. He emigrated to America in 1866 with his wife Bergit Olesdatter Teigen. They came to Stearns County, Minnesota and settled in Pine Creek where in 1902, he made this violin. Christian died there in 1903. The violin was given to his son Olof who played it for many weddings and festivals. Olof’s daughter Lavern Thoen Johnson played the violin and Olof’s grandson Stephen Keller had the instrument repaired and also played it. It has its own display case and is in good condition.

Hardanger fiddles / violins have a second set of strings that run underneath the strings that are actually played. They vibrate in sympathy with the played strings and create a unique and pleasing sound. They are often ornately decorated, much like the one in our collection.